However did I miss this film for so long? It's FANTASTIC.

Required viewing for any fan of professional cycling - it gives the whole backstage saga from the inside of the T-mobile bus in the '03 Tour, the year Jan Ullrich took his sabbatical with Bianchi. The year Tyler broke his collarbone. The year Lance rode across that field.

Available for rental from Netflix, if you're a member.

More screen shots. This is fun when it works. 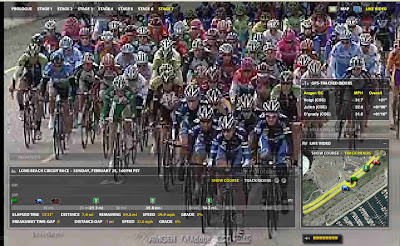 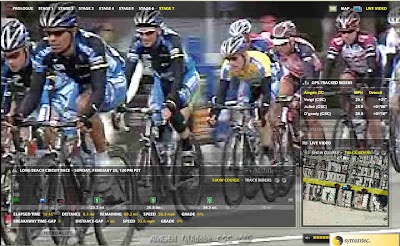 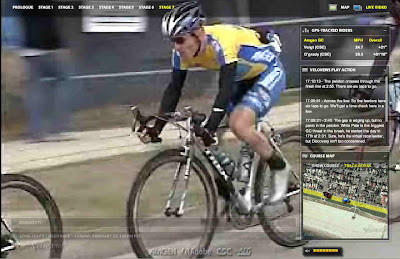 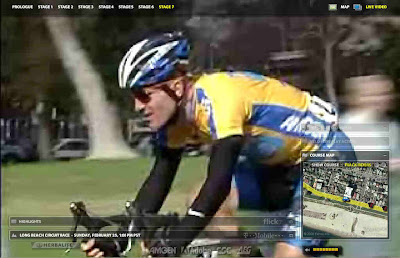 For the record, the Lanterne Rouge rider of 119 finishers of the 2007 Tour of California is Davide Frattini, an Italian rider on Team Colavita-Sutter Home. 144 riders finished the Prologue, so he finished ahead of 25 other riders that didn't make it to the finish line. 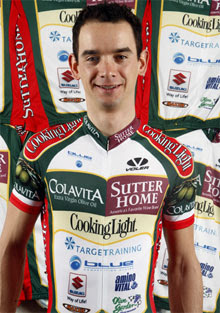 It was a fun Tour to watch this year, with some great racing! But JEEZ, they really worked hard to produce the ugliest possible makeshift podium, didn't they!?? That final victors' ceremony was kind of ... minimalist! 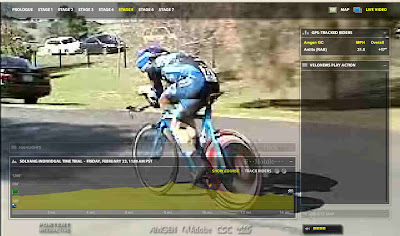 When it's working, it's pretty darned amazing. I sure hope they have this working for Le Tour next July! Here are a couple screen shots of Levi Leipheimer during his phenomenal winning individual time trial. Looks like the one above caught his leg in 2 positions, which isn't too surprising since I think the full-frame rate is probably 30 Hz and he was doing at least three pedal revolutions per full frame. It's not apparent when you watch, though some of the pixelated images are a bit jaggy. 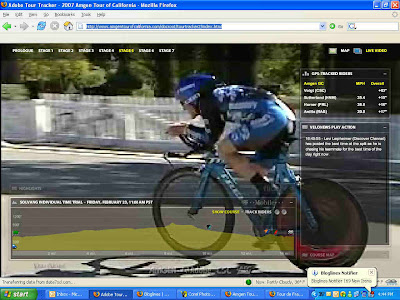 The bottom photo shows his Floyd-esque "Praying Landis" time trial position. I'll bet the kindly race officials in California didn't make him alter it at the last second like they did to Floyd last year. I forgot to trim all the extraneous computer garbage off from around the edges, but it gives the actual effect of how it was displayed on my screen.


Saturday update: Unfortunately, the Amgen feed (other than frequently-breaking-up audio and some GPS tracking maps) didn't seem to be coming through to my computer for the first 90 minutes of coverage today. Finally I gave up and turned it off. The TV coverage will begin in less than 2 hours, and I'll just wait for that.

Sigh. I guess it was too much to hope for, a grand Tour within the United States.

How about maybe some live coverage so that we don't have to wait up until eleven to see the stage finish on a weeknight here on the east coast?

Or at least a live web feed?

Or maybe even results online within an hour after the stage finishes?

Throw us a bone here, organizers!

Mostly I'm really disappointed that my personal favorite pro rider, Dave Zabriskie of CSC, crashed out today. I hope he's not badly hurt. I'll continue to watch the TofC and hope that another of my favorites, Ivan Basso of Discovery, does well, but he's probably going to be keeping a very low profile riding in support of Levi Leipheimer.


Update (Tuesday): The Amgen site seems to be working today, hurrah! And it is pretty slick, I'll grant that. Though it should have been working two days ago already. And I still can't understand why the officials gave Levi the gift of the leader's jersey yesterday after the crash 10K back from the finish line.

As of today, when I learned their 2007 team introduction was devoid of supermodels.

Of course, I always liked how they managed to have their team bus take out Alessandro Petacchi from the 2006 Vuelta a Espana without turning a single pedal-stroke. 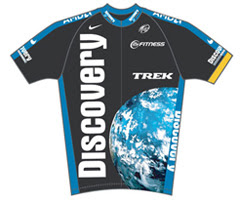 "The team will still race under the Discovery banner in 2007, including the Tour de France, but must find a new sponsor for 2008, Bill Stapleton, Armstrong's longtime agent and general manager of the team, said Friday."

Well that sucks. They just got their kit right. 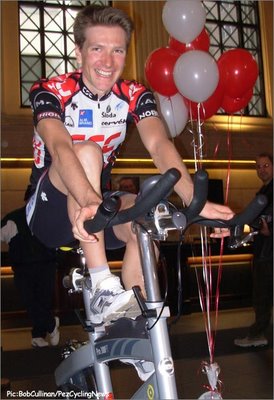 Could anyone be any more cute? I don't think so!!! More of Dave Z riding a bike trainer in a bank lobby (for charity), along with a pre-Tour-of-California interview here.

I was a little surprised to read that the team doesn't take a more structured approach to physical training: "You kinda have to be responsible for yourself."