Lance and the USO

I don't usually mention in this blog those pro cyclists who finished up front and attracted all the press coverage, but Lance Armstrong's blog from his USO tour of Afghanistan and Iraq is worth a look.

Many thanks to all those folks over there serving and far away from their families this time of year.

Iker Flores, Tour de France Lanterne Rouge of 2005 while riding for Euskaltel-Euskadi, will not return to the peleton as a professional cyclist in 2008 after the termination of his 2007 team, Fuerteventura-cantarias.

Best wishes to him in his next career!

Petition to the UCI for equal pay for top female pro cyclists:
http://www.petitiononline.com/equalpay/petition.html 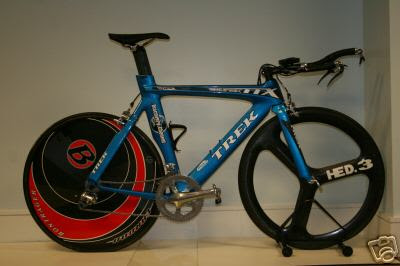 How about a slightly used Trek Madone for your next road bike, starting at $8,200?

Or perhaps a Trek Equinox time trial bike starting at $10,200?

I'm pretty sure you can get those old Discovery Channel decals off with a heat gun. . . .

Update: They got NO bids at all on the bikes. But some of the used helmets were bid up over $800!

Best team nickname for next season