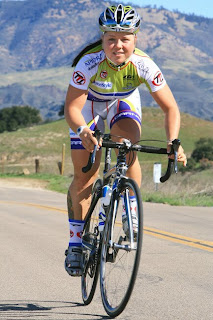 The best thing about this blog is learning about new upcoming riders - and here's one with a big suitcase of courage: Morgan Patton, the Lanterne Rouge of the prologue of the women's race at the Redlands Bicycle Classic.

Morgan was diagnosed with Type 1 diabetes at the age of seven. As a teenager, she struggled to effectively manage her diabetes."

But that changed when she rode along as part of Team Type 1's crew for the 2006 Race Across America. That experience marked the first time she had been surrounded by other people with diabetes – all of whom were athletes competing in a rigorous event. This inspired her to start cycling as a means of controlling her diabetes.

At age 17, she began competing in bike races, and, over the years, her A1C has been reduced significantly. Where she might have previously struggled to control her diabetes before, now she is a trained athlete, managing her diabetes through healthy diet and exercise, along with using the latest technology for monitoring her glucose levels.

She was last of the 138 starters today in a field that included the world time trial champion (Amber Neben) and U.S. time trial champion (Alison Powers). She is also first to admit that uphill time trials are not her thing. Criteriums are much more her style. In fact, she finished second and Team Type 1 teammate Monique Hanley was third at the Kelly Cup Criterium last June. This year, she has already won three races in Georgia and finished second in a fourth.

Update: Unfortunately, Morgan was a DNF the following day at Redlands when the average speed of the winner was 23.01 MPH. Taking the Lanterne Rouge slot is Beatriz Rodriguez of Kahala LaGrange.

She stayed in the game and ultimately after the third stage finished as the overall Lanterne Rouge of the women's division at Redlands:

British rider Jeremy Hunt, riding for Cervélo TestTeam, is the Lanterne Rouge of the final stage of Paris-Nice, in 92nd place for the day. The overall Lanterne Rouge of the general classification was Alexandr Dyachenko, a Kazakh rider on the Astana team. 159 riders began the stage race, so Dyachenko finished ahead of over 40% of the starters. 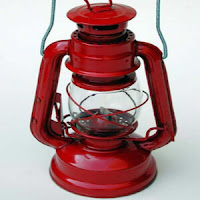 Our tweets, like our blog posts here, will probably be concentrated in month of July for the Tour de France.

There's also a link way at the bottom of our right sidebar if you lose the address.