Filippo Pozzato (I just love that name), Lanterne Rouge of Stage 3 of the 2006 Tour de France, turned it around and won Stage 3 today in the Tour of Britain. The Italian on the Quickstep-Innergetic team attacked with 15 km left to go and finished the stage with a solo win.

"The Italian said afterwards that he wanted to do well in the Tour of Britain to impress the selectors for the Italian World Championships team, and hopes that they saw his strong performance today." 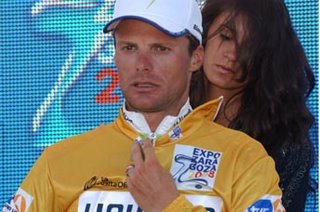 Danilo DiLuca, Lanterne Rouge of Stage 1 of the 2006 Tour de France, has made good in the Vuelta a Espana and now wears the jersey of gold. The Italian rider is a member of the Liquigas team. Somehow he's just not looking terribly happy to be accosted by pretty Spanish podium girls. 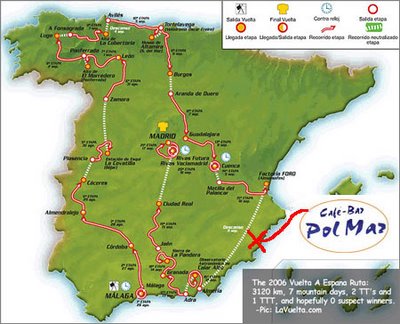 Only one of the ten riders finishing at the bottom of the overall standings in the 2006 Tour de France has been chosen to participate in the 2006 Vuelta a Espana: Kjell Carlstrom, the Finnish rider on the Liquigas team.

Former Tour de France Lanternes Rouges riding in the Vuelta this year include:

2006 TdF Stage 4 Lanterne Rouge, Magnus Backstedt, was interviewed by Pez recently, and has a few comments from a peleton insider on the doping controversies.