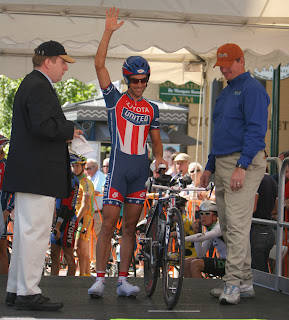 Justin England, that is. The handsome 29-year-old rider on the Toyota-United Pro Cycling Team has retained the spot in which he started the Tour of Missouri and outlasted 16 riders who failed to finish the Tour. The Asheville, NC resident finishes the 2007 Tour of Missouri in the Lanterne Rouge position. His nearest neighbor in the General Classification was Brian Dziewa of Jelly Belly, 44 seconds ahead.

"Justin relished his role as Lanterne Rouge, particular for the Stage 3 time trial. He clowned for the crowd, mugged for the camera and enjoyed all the attention that goes with being the first guy down the start ramp." 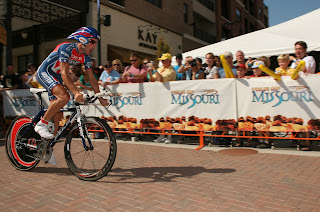 "I will also put in that he worked his tail off on the final stage. I was looking at photographs from the final two laps of the circuit (final 20 miles) and he's on the front leading the chase of a breakaway - with several Saunier-Duval and Symmetrics and Health Net racers lined up behind him. With only four riders left in the race, Justin had to do some of the work to ensure a sprint finish. In fact, after the break was caught, he dropped back and found teammates Chris Wherry, Heath Blackgrove and Ivan Dominguez and towed them halfway up the field where Blackgrove took over to get them up to the front with one kilometer to go." 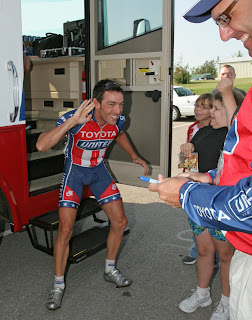 "England said, "I sat up at the finish, just to make sure today. I was glad that the team could get stage wins to bookend the race. Ending up in the Lanterne Rouge was just a bonus.""

It's great to see a rider who clearly enjoys his job! Bravo, Justin, well done! Enjoy your off season!

Update: Some more great photos of Justin and further accolades at spare cycles! He's got lots of fans out there! 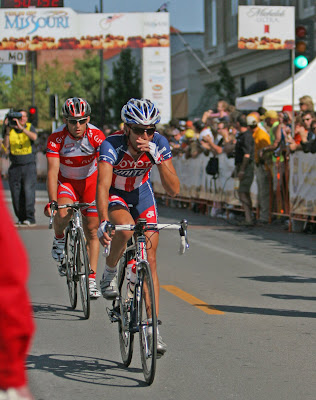 At the 2007 Tour of Missouri, known in some circles as "Disco's Last Hurrah", several American riders are close in the standings for the Lanterne Rouge.

In stage 4 on Friday, Brian Dziewa of Jelly Belly and Justin England of Toyota-United (pictured) were the final two riders in the GC in the 105th and 106th spots, respectively, and separated by 33 seconds.

However, after Saturday's stage 5 to St. Charles, they pulled up in the standings and the final riders were all on the Kodak-Sierra Nevada team, with Americans Ben Raby, Dan Timmerman, and Pete Lopinto in the last three spots.

The Tour of MO concludes today with a circuit race on the streets of St. Louis.

Piepoli mixes it up 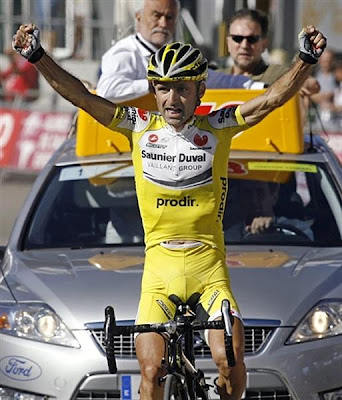 Former Lanterne Rouge Leonardo Piepoli of Saunier Duval-Prodir shows off his belly button for his Vuelta Stage 9 win yesterday, showing that he has survived his bout of controversy for excessive asthma medication.

However, he's still the subject of controversy. CSC's Carlos Sastre was quite insulting about Piepoli's tactics today in the subsequent Stage 10 in which Piepoli took 7th place and Sastre took 5th. He accused him of dirty racing and aiding his competitor Denis Menchov (of Rabobank) to take the stage win and retain the lead in the Vuelta.

I haven't followed the Vuelta closely this year, I admit. Right now after Stage 5 their Lanterne Rouge of 183 riders is Vincent Jérôme, a French cyclist on Buoygues Telecom, 6:02 back from the penultimate rider in the overall standings.

I was just interested to see that our old friends Tom Boonen of Quickstep-Innergetic, Magnus Backstedt of Liquigas, and Bradley McGee of Française des Jeux were all in the bottom 15 riders (#168, #172, and #181 respectively).

Geoffroy LeQuatre, the brave Cofidis rider who served as Lanterne Rouge for one day this summer, dominated the first stage of La Vuelta Espana in a small breakaway. The win ultimately went to Daniele Bennati of Lampre-Fondital.