Another bad design for cycling shorts 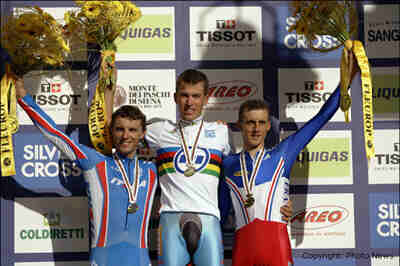 Final standings of some of our previous Tour de France Lanternes Rouges in the 2006 Vuelta a Espana:

Just for the record, the rider who finished the 2006 Vuelta officially with the most time in the saddle (the Vuelta Lanterne Rouge equivalent) was Cyril Lemoine, a Frenchman on the Credit Agricole team, who finished the course within the limits but 3 hours and 23 minutes longer than the grand tour winner.

They don't pick 'em for their brains

Not really related to Lanternes Rouges, but . . . I just found a guy who topped the feat of Paolo Salvodelli's withdrawal from the 2006 Tour de France from crashing after the day's stage was DONE, his injuries probably resulting from a dumb decision not to wear his helmet.

Today Alessandro Petacchi (Italian on Team Milram) had to withdraw from the Vuelta a Espana because he was so pissed off after losing a sprint that he punched the team bus and broke his hand.

Update: Apparently he punched the Lampre bus. Do I see a "He was mean to me!" Simeoni-type lawsuit filed on behalf of the bus?