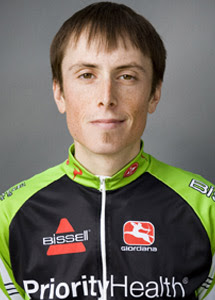 For the record, the Lanterne Rouge of the 2007 Tour de Georgia was a 25-year-old American rider for Team Priority Health by the name of Omer Kem.

Kem resides in Salem, Oregon and was the 2006 Oregon State Road Race Champion. He ended up in 106th place in the General Classification, which still puts him ahead of ten other riders who started the Tour but didn't make it through the final stage.

Danilo Di Luca, Lanterne Rouge of Stage 1 of the 2006 Tour de France, took the victory in Liège-Bastogne-Liège today for the Liquigas team. Cycling News said: "After 262 kilometres of racing and more than six hours through the rolling Ardennes in Southeast Belgium, Di Luca noted that this race was one that was always on his mind. "I always thought that this was the most beautiful race and the one for me. Today I am very, very satisfied with what I have accomplished.""

Sébastien Joly, the Française des Jeux rider who spent most of the 2006 Tour de France in the Lanterne Rouge position, is having a great start to 2007. Today he was victorious in the Paris-Camembert race (Trophée Lepetit), winning from a six-man breakaway for the last 90 minutes of the race.

Our best wishes for a speedy recovery go out to two-time former Lanterne Rouge Jimmy Casper.

"Team managers and top riders were among those cursing the organisers of the Gent-Wevelgem one-day classic on Wednesday as the treacherous cobblestones sent several riders to hospital. The descent of the Kemmel climb, completed twice by the peloton, took the biggest toll and left one rider, Frenchman Jimmy Casper, in intensive care. Unibet's Casper sustained head, face, and shoulder injuries when he came down hard on the downhill section some 50km from the finish. He lay bloodied and prone after he came off his bike, flipped over and scraped his face across the ground and is now in hospital awaiting surgery."
Update: According to the Unibet Cycling website, Casper sustained a broken wrist and broken jawbone on April 11th, along with a "split upper lip and his torn up tongue". I haven't seen any more recent updates on his recovery, but I'd guess that would keep him out of action at least through the Giro d'Italia which starts on May 12th (and is listed on Unibet Cycling's pro team calendar).