Every year I see dumb comments and jokes about the Lanterne Rouge of the Tour de France and "the race" for the honor. I don't like that type of demeaning ridicule, personally (at least not at the guys who are doing massive amounts of work for relatively little pay and attention), and they're one of the reasons I started this blog.
Before anyone jokes about 2011 Tour de France Lanterne Rouge Fabio Sabatini of Liquigas - let's recognize the magnitude of his accomplishment. Over a span of 3 weeks, he was racing for 90 hours, 10 minutes, and 5 seconds at an average speed of 23.63 mph. Over the Pyrenees and Alps.
166 fellow professional cyclists were with him along the way and took up to 3 hours, 57 minutes, and 43 seconds less time to pedal exactly the same course - a difference of only 4.39%.
And 32 of the pro cyclists who started the race 3 weeks ago were unable to finish it at all (16.1% attrition).
Bravo, Fabio. Carry your Lanterne with pride.

Fabio Sabatini, Italian rider for Liquigas, had the honor of rolling down the starting ramp first for individual time trial today and will carry the fabled Lanterne Rouge into Paris. He finishes 3:13 behind the previous holder, Andrey Amador of Movistar. Vincent Jerome finished today 155th out of 167 Tour de France finishers.

The final finisher of the 2011 26.4-mile ITT was Jeremie Galland of Saur-Sojason at an average speed of 23.7 mph - ahead of 31 DNFs this Tour.
Best wishes to both of them in their future professional careers. We'll be cheering you on!

Today Andrey Amador got into a breakaway and arrived in 11th position on an Alpine stage, moving him up the overall classification.
The new Lanterne Rouge is Fabio Sabatini of Liquigas-Cannondale, who is riding in support of Ivan Basso's podium aspirations.

Lanterne Rouge is one tough guy

Andrey Amador of Movistar was the final official finisher inside the time limit in Stage 14 of the 2011 France, keeping his hold on the Lanterne Rouge.
He'll hang on a while longer. He's tough as nails.
Last December while training at home in Costa Rica, he was beaten so severely by thugs who stole his bike that he laid in a ditch unconscious for 6 hours. He sustained kidney and lung damage from the attack.
In April he broke his collarbone, which kept him out of the Giro.
On Stage 1 of his first Tour he sprained his ankle badly.
On the brighter side, he's not only the first Costa Rican to ride in the Tour de France, he's the first rider from any Central American nation.
He's been honored in his home country with his image on a postal stamp.

I have a hunch he will hang on a while longer. Best wishes to him! Note he's also the first Tour de France Lanterne Rouge who is active on Twitter @Andrey_Amador. Give him a shout of encouragement, he appreciates it!

Vincent Jérôme of Team Europcar has held the Lanterne Rouge for 12 consecutive stages of the 2011 Tour de France. Today, by finishing at about 9 minutes after the stage winner in Lourdes, while the autobus finished at about 22 minutes, he reliquished his position and moved up one in the overall standings.

The new Lanterne Rouge is Andrey Amador of Costa Rica, riding for Team Movistar. Since I was previously unaware that there was a representative of Costa Rica in the Tour (and probably not alone in that), I welcome him taking over the role and gaining the recognition associated with the Lanterne Rouge. Bravo!

In his feed at http://twitter.com/#!/MrMichael_Smith
http://espn.go.com/espn/contact
-----------
Followup:
Excellent articles on this issue followed at:
http://www.washingtonpost.com/blogs/early-lead/post/tour-de-france-car-crashing-into-cyclists-draws-laughs-from-espns-michael-smith/2011/07/12/gIQAM3pxAI_blog.html
http://mobilelocalsocial.com/2011/espn-michaelsmith-tourdefrance/
http://bicycling.com/blogs/boulderreport/2011/07/13/the-apostasy-of-idiocy/
http://www.bicycling.com/tour-de-france/expert-analysis/bikesnobnycs-tour-de-france-stage-10-report-oh-indignity?page=0,0
http://www.mediabistro.com/sportsnewser/michael-smith-is-not-popular-with-the-cycling-community_b11709
http://www.bikebiz.com/index.php/news/read/barbed-wire-car-bike-tdf-smash-is-laughing-matter-tweets-us-tv-anchor/011508
http://deirdrereid.com/2011/07/14/tour-de-france-espn-social-media-failure/
http://blacksportsonline.com/home/2011/07/do-twitter-and-freedom-of-speech-go-hand-in-hand/
http://watrickp.wordpress.com/2011/07/15/michael-smith-versus-the-world-of-cycling/
http://lavamagazine.com/features/op-ed-no-anonymous-smith#axzz1S1czQl1G
http://www.recordnet.com/apps/pbcs.dll/article?AID=/20110717/A_NEWS0804/107170303
http://www.firstoffthebike.com/features/2236-dont-mess-with-the-two-wheeled-crowd
A petition with over 1,500 signatures at my last check (7/27):
http://www.change.org/petitions/espn-demand-the-resignation-or-fire-michael-smith-for-tdf-comments
and a truly hilarious video take on it at:
http://www.youtube.com/watch?v=aNHWrkdE_kM&feature=player_embedded
Additionally, you can listen to the Around The Horn broadcast of July 11, 2011 in which all the commentators seemed to find great amusement at the car hitting cyclists in the Tour de France (at the beginning and about 13 minutes into the broadcast):
http://sports.espn.go.com/espnradio/podcast/archive?id=2839445
or a shorter clip is here:
Audioboo / ESPN - Around The Horn - TDF Crash: http://bit.ly/nSyXwk
You may wish to provide feedback to the sponsors of the Around The Horn show via feedback on their websites or at:
http://www.facebook.com/AroundTheHorn
http://www.facebook.com/PizzaHut (sponsor)
http://www.facebook.com/hanes (sponsor)
A Facebook page entitled, "Fire Michael Smith of ESPN" (over 480 "likes" at last check on 7/27)
http://www.facebook.com/pages/Fire-Michael-Smith-of-ESPN/247929945218143
or directly to the individuals on the Around The Horn broadcast on their twitter feeds at:
@MrMichael_Smith @TimCowlishaw @woodypaige @BillPlaschke
~~~~~~~~~~~~~~~~~~
July 12, Michael Smith added on his Twitter feed a statement:
http://twitter.com/#!/MrMichael_Smith/status/90964379046117376
"I apologize for my insensitive remarks re: the TdF crash. I recognize my comments were inappropriate given the serious nature of the crash."
then shortly thereafter when someone who sent him a message saying "All of these people attempting to ruin ur life and ur the jerk? It was a joke. Just like these people attacking u. A joke" he responded:
http://twitter.com/#!/MrMichael_Smith/status/91164219457802240
"thanks man. believe me i'm good. not gonna succeed."
~~~~~~~~~~~~~~~~
Update July 13: @MrMichael_Smith has deleted the offensive statements from his timeline on Twitter, but not his numerous statements defending them to outraged respondents. Deleting them does not make them unsaid, nor does it change the hilarity in the Around The Horn broadcast.
HERE is a screenshot of the original unexpurgated set of Michael Smith's tweets.

Nice use of some of the data on this long-neglected blog by the good folks over at Podium Cafe.

"Anyone who thinks that being the lanterne rouge means you're a shit rider is missing the point."

Another rain-soaked crashfest. Vincent Jerome is hanging in there as Lanterne Rouge, and although he got caught behind in a split, finished with the final grupetto of 21 at 12:26 back from the stage winner today.
At the start of the stage he said (roughly translated): "My condition is stabilized. Now I manage to use my left leg. It will go better and better. The red lantern is anecdotic (legendary?), but people encourage much."
2010 Lanterne Rouge Adriano Malori of Lampre was in an unsuccessful breakaway, but finished in mid-pack and is 95th in the overall standings.
Five riders are out of the Tour, bringing the peloton down to 193.

As someone who also has two first names, I should know better. I keep getting Vincent Jérôme's name backwards. He's holding on to the Lanterne Rouge for the third consecutive stage of the 2011 Tour de France. Here's the good-looking young man's profile at Wikipedia.
There have been no DNFs so far, despite a number of crashes.
Right next to him in the penultimate spot in the GC is Dimitry Murayev of Radio Shack. We probably will see more of him - he was the Lanterne Rouge last year in two stages of the Toru de France and was the overall Lanterne Rouge of the 2008 Vuelta.

The first two stages of the 2011 Tour de France have seen Frenchman Jerome Vincent Vincent Jérôme hold the position of Lanterne Rouge for Team Europcar, after seeing some trouble in a crash-ridden first stage. Here he is getting things untangled: 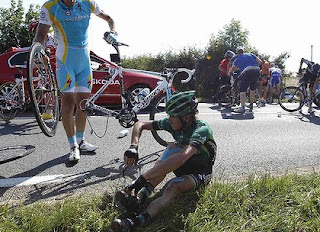 Pre-Tour favorite clenbuterol-positive Alberto Contador finished Stage 2 in 75th place, 1:42 back from the leader, which makes me happy. Naturally he and the team aren't happy with that result, so they're asking for the rules to be retroactively changed in their favor.