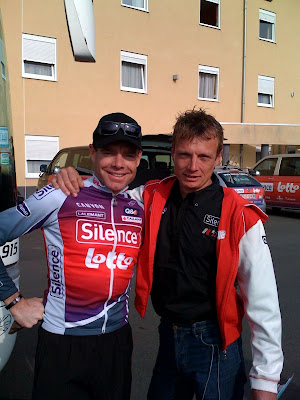 Jimmy Casper is on fire!

Jimmy Casper, the two-time Tour de France Lanterne Rouge (2001, 2004) secured a victory over the weekend at the Paris-Camembert race. He now rides for Besson-Sojasun. Congratulations!

Michael Friedman, aka "Meatball", riding for Garmin-Slipstream, was the Lanterne Rouge finisher of the grueling Paris-Roubaix race this year, coming over the line in 99th place. He's a Pittsburgh native and twice a winner in the Team Pursuit at the USA National Championships.

Here's a photo that illustrates how he must have felt. Eighty-eight other starters failed to make it to the finish line of the race nicknamed "Hell of the North". Well done, Mike!