I forget where we are. I fell asleep. Stage 11, I think? Same old thing. 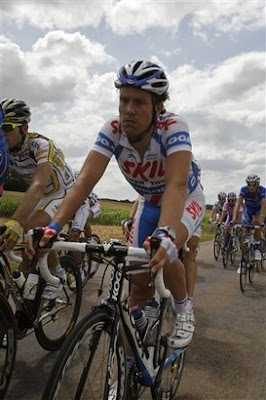 Here's our Lanterne Rouge Kenny Robert Van Hummel today, before he made it over the line in 15th position, right before Tom Boonen. There were 170 finishers today after Kurt Asle Arveson didn't start with a broken clavicle. Only 5.5% attrition so far - that will soon increase in the Alps.

Sorry, sprinters, I wanted the Alps to start yesterday.

But even so, 15th place in a stage of the Tour de France isn't ever shabby. Last place isn't shabby either. Van Hummel most certainly did not deserve this cheap shot.

Comments:
A bit dull, as you say. That should end tomorrow. As for Van Hummel, you're so right:

That's a little over 119 miles at better than 27 mph average. I cringe to think of it. Anyone who finishes is a superb athlete.