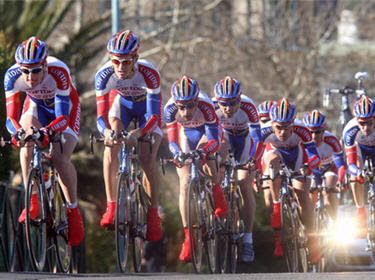 The entire Cofidis team is leaving the Tour too, because of the positive exogenous testosterone test on their rider Christian Moreni. They have chosen to forego a "B" test. "The 35-year-old former Italian champion admitted to administering himself with a synthetic version of the male sex hormone".

Two of their riders have previously abandoned, Ivan Ramiro Parra in Stage 8 and our former Lanterne Rouge Geoffroy LeQuatre did not start Stage 6.

Today's departure should decrease the peloton by another 7 riders to 143 cyclists.

These Cofidis riders leaving the Tour will include Nick Nuyens, who was in the penultimate position in the General Classification, and Rik Verbrugge, whom we had previously seen in our bottom five riders. Their highest-placed rider was Sylvain Chavanel, in 26th position, who had worn the polka-dot jersey after stages 6, 7, and 8.

Also departing the Tour: their British rider Bradley Wiggins who had finished 4th in the Prologue and 5th in the stage 13 Individual Time Trial. Wiggins has been outspoken against doping.

Unlike Astana, the Cofidis team was not well-placed in the standings upon their departure - 17th out of 20 remaining teams, below Barloworld and Gerolsteiner, but ahead of Agritubel, Milram, and Francaise de Jeux.

In terms of international relations, it may be a mitigating factor that a French team has now taken an enormous hit in the fight against doping, or otherwise France might have soon had to prepare to surrender to Kazakhstan.