An exciting stage to watch! Waiting for the official stage results to pop up. . . .

. . . which brings us down to 165 riders starting the stage today. Ventoso was not mentioned in the medical report from the ITT yesterday. From the Saunier-Duval Prodir Team website: "The rider of SAUNIER DUVAL-PRODIR had been suffering terribly with his left hand since he fell in Montpellier, and thus decided to quit. As the swelling didn´t go down, he left for Spain early in the morning, departing from Toulouse."

I haven't heard of any abandons today, but it's possible some riders may not make the cutoff time at the finish.

Former Lanterne Rouge Alexandr Kuschynski (the rider from Belarus on the Liquigas team) had a fantastic finish today, 38th for the stage with a time gap of 11:10 from the stage winner, which blasts him out of the back of the General Classification into 113th place overall. Similarly, the Frenchman riding for Credit Agricole Anthony Charteau (who was next to last in the standings) had a strong day in the mountains and finished at 26:26 and 69th place for the stage, lifting him to 159th place overall. Here are the final five overall after Stage 14:

Geraint Thomas, the Welsh rider for Barloworld, is the youngest rider in the Tour at 21 years of age. To his credit, he "is finding the going tough - but he keeps going."

Wim Vansevenant, the Belgian on the Predictor-Lotto team, holds his position as Lanterne Rouge and now has a time gap of 6:27 to the next closest rider in the standings. He has held that position for seven consecutive stages now, and if he continues to finish in the main peloton each day it's entirely possible that he will earn the overall Lanterne Rouge title for two consecutive Tours de France. He's still got a lot of work to do to support his team leader, Aussie Cadel Evans!

This (perhaps prophetic?) photo of Vansevenant on the roadside with the peloton passing by was taken during the Stage 1 rollout from London by placid casual: 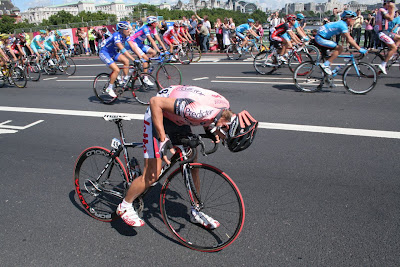